The True Value of Fluorescent Diamonds 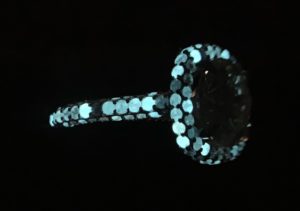 Often, diamonds are adored for the way they seem to shimmer as they reflect light. There’s something about the apparent brightness of these gems that give them an almost magical, otherworldly quality. As much as the radiance of a diamond may matter to its value, there are some that seem to reflect light in an entirely different way. Fluorescence in diamonds is often seen as a distraction or flaw, but they are often more valuable than they’re given credit for.

The Unusual Quality Of Fluorescent Diamonds

Few diamonds emit light when exposed to ultraviolet rays. The reason has to do with the way they are formed. Diamonds are essentially crystallized carbon organized in a lattice-like structure. Imperfections in the lattice often diminish their brightness, but they are also occasionally responsible for endowing them with unusual properties. Fluorescence in diamonds is caused by trace nitrogen molecules trapped within the gaps of carbon molecules, causing them to glow under UV light. A single nitrogen molecule trapped near a vacancy causes a bright yellow/orange light, while more commonly three nitrogen molecules trapped adjacently cause it to glow a bright bluish color. While in most respects fluorescent diamonds are seen as having less value, the reality is that they’re nearly always indistinguishable from non-fluorescent diamonds. In some cases, they may even enhance their beauty. The fluorescence is really only visible in most diamonds when exposed to strong UV light such as that of a tanning bed or UV lamp. In colorless diamonds, this can negatively alter their appearance, though only while exposed to the ultraviolet light. In other cases, such as with the yellowish I-Z colors, strong blue fluorescence can actually complement their appearance in the same circumstance.

Selecting The Diamond That’s Right For You

Generally speaking, fluorescent diamonds are often needlessly overlooked, though in most cases their impact is minimal. In some cases, they even enhance their quality. At Finer Custom Jewelry, our aim is to provide a professionally tailored experience for you to find the stone that speaks personally to your individual needs. Feel free to contact us with any questions or concerns, and get started on crafting your own uniquely conceived jewelry.